This time of year, thousands of authors are gearing up for a month of uber-productivity. They're canceling weekend plans. They're figuring out how to re-set their alarm clocks. They're shifting work deadlines so they never, ever have to work late. At least not for the next month. And they do these things for a single purpose: to write a novel in 30 days.

Yes, next month is NaNoWriMo. And I hate it.

Sorry, but it's the truth. The mere thought of this causes a Cheney-like sneer to dominate my features. My eyes being to auto-roll at the mention, and I start looking for sharp objects to end the pain. One way or another.

On the surface, NaNoWriMo is a great idea. You join a thousands-strong peer group and achieve the unthinkable; you write your own novel, and you do it in 30 days. No editing. You just write. You shock your brain into a routine that keeps your butt-in-seat, forces you to pound on the keys, and just keep going until you hit (at least) 50,000 words. Then... you win.

All of that? I love. And hate.

I hate NaNoWriMo for 3 basic reasons:

If you've made it this far, you're either fist-pumping in the air with me or just looking for my contact info to tell me what a giant douchebag I am. Thanks to the former, and it's under contact for the latter.

Having said all of this, I remain committed to helping indie authors and publishers be even more awesome than they already are. But that presumes a certain amount of awesomeness to begin with. And yes, I can point to a myriad of awesome indie authors. These are the people who elicit a little squee from me when they publish a new book.

So see? I'm not a cold, heartless bastard who's trying to keep you from expressing your creativity. Far from it. I'd just like you to do it better. Much, much better. If you don't know if you have what it takes to write a novel, then I highly urge you to take part in NaNoWriMo this year. Or next. And then once you've learned that you can, it's time to learn the rest of what it means to be a writer today. Because you're just getting started!

Oh, and because someone will ask: No, I've never participated in NaNoWriMo. I'm not a novelist. And I have no desire to be one. My love/hate relationship is much more pragmatic than simple jealous anger.

Email ThisBlogThis!Share to TwitterShare to FacebookShare to Pinterest
Labels: Writing

Why Authors Should Attend Podcamp AZ

At the digital publishing workshop Jeff and I gave last month, a sizable portion of the authors wanted more information about making their work into audio books. As I explained to them, very good and very inexpensive pro-sumer grade recording equipment is out there. And while you may not pull off a performance of Scott Brick's in-studio caliber, many authors do a damn fine job recording their own audio books at home. 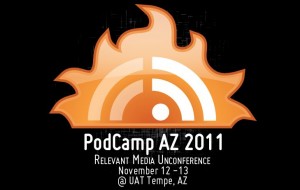 A great way to learn how to record your own audio book will be to attend Podcamp AZ on November 12th & 13 in Tempe, AZ. No, the conference isn't specifically about recording audio books. But it is a great place to get your "how do I get started" questions answered by people who are there in the trenches, recording audio every day. You can also see and get hands-on experience with recording equipment you can buy at your local music shop or on Amazon.com. I'm telling you, this isn't rocket surgery.

I'll talk quite a bit about authors and podcasting in all of my talks, as it's largely the place I've been involved in podcasting since the start.

Outside of those talks, I'm completely available to chat, give ideas or push you in the right direction. Podcamp AZ is a blast, and I think any author serious about embracing digital publishing -- even if you aren't ready to record your own audio book -- should attend.

Here's a smattering of the other talks happening that authors and publishers would get the most from:


And that's just the start. Talks on WordPress (because your website probably sucks), email marketing, using photos in your work and loads of other information you need as a digital author or publisher is all there for the taking. Come on!

So go register. Right now. It's free. And then drop me a line. I'd love to get together!
Posted by Evo Terra at 11:14 PM No comments: