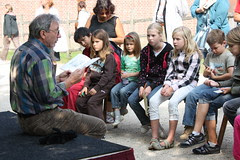 One old promotional trick gets a facelift with Google+. I'm talking about author readings, something that was previously limited by proximity.

In the olden-days of, oh... 3 days ago, author readings were the bastion of book tours and conventions. Readers had to be at the same place as the author at the same time to experience the reading. Sure, readings could be recorded and later broadcasted. Or podcasted. Or accessed through live-streaming sites like uStream.tv. But while the technology to reach the masses was there, they by-and-large weren't connected to the author's network, so they didn't spread very far.

Google+ can change that through the Hangout feature.

Google+ Hangouts are live video sessions that can house up to 10 people. Now, I know what you're saying: 10 people does not a broadcast make. I agree. But hear me out.

First, consider this is the first large-scale social network to tightly couple the idea of friends/followers -- called "circles" in G+ -- with the ability for multi-person, bi-directional video chat. That's key to making the author feel like they aren't talking to a camera -- they can actually see the people who are part of the audience. And rather than drumming up interest on one social channel (Facebook) and then trying to drive people to go to another social channel (uStream) to watch the show, it's 100% self-contained.

Yes, Google+ really needs to get some sort of "event" feature like FB has. That would allow authors to announce and let fans RSVP to the reading in advance. I trust that they are working it. And a lot more.

Don't think single-instance audience size -- think volume. That assistant has a single job: to rotate people through the hangout. Maybe it's on a timed schedule. Maybe some sort of RSVP system is used. And maybe Google will eventually figure out some sort of round-robin. But the idea is sound: authors build interest in their readings and give those readings in a Google+ Hangout. People come and go through the experience.

Will it work? I think so. The infrastructure -- the important parts, at least -- is built. Creating a joining a Hangout on Google+ is incredibly simple. Just work through the issue of having too many people and you're well on your way. And I wouldn't sweat it too much. I think Google has plans on increasing -- drastically -- the number of people who can attend a Hangout. So cut your teeth on them while they are somewhat controllable.

The more I dig into Google+, the more I really like it for the indie author or publisher. I'm off to think about it some more. In the mean time, circle me on Google+. You know you want to...
Posted by Evo Terra at 10:30 PM

Email ThisBlogThis!Share to TwitterShare to FacebookShare to Pinterest
Labels: Google+, Marketing for authors